So what are Pymetrics Games? And how should you prepare for it? Let’s find out in our comprehensive breakdown of these games.

What are Pymetrics Games?

Pymetrics Games are gamified pre-employment tests for large companies to assess and filter their candidates. It includes interactive games to test specific personality traits or skills depending on the hiring needs of each Pymetrics client.

Pymetrics now offers more than 10 game-based assessments which can be taken separately or simultaneously per the employer’s request of the role.

What do Pymetrics Games measure? 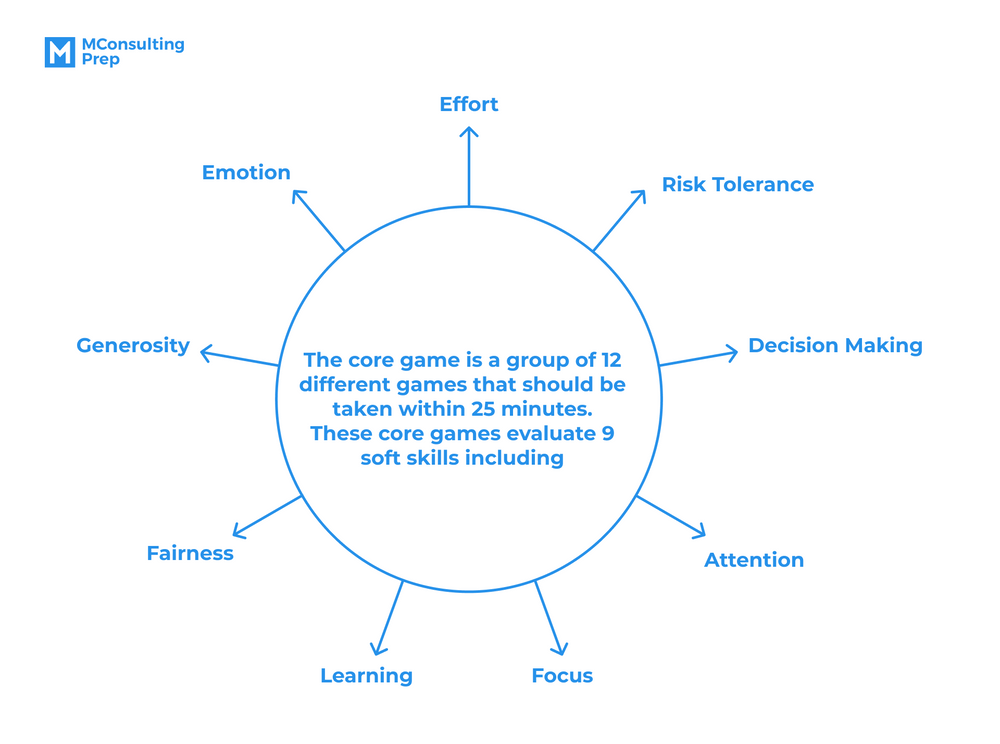 The core game is a group of 12 different games that should be taken within 25 minutes. These core games evaluate 9 soft skills including:

Meanwhile, the numerical and logical reasoning game is an additional set of games taken alongside the core games. The set contains 4 games with a time limit of 7-10 minutes. Its categories of assessments are Numerical Agility and Quantitative Reasoning.

The Pymetrics Balloon game presents you with a series of colorful balloons that you have to pump within approximately 3 minutes. You will be given one balloon to pump at a time, and you will earn money with each pump. But at some points, the balloon will pop.

You can either collect all the money at any time or keep pumping for more. Nevertheless, you will lose all the money once the balloon pops. 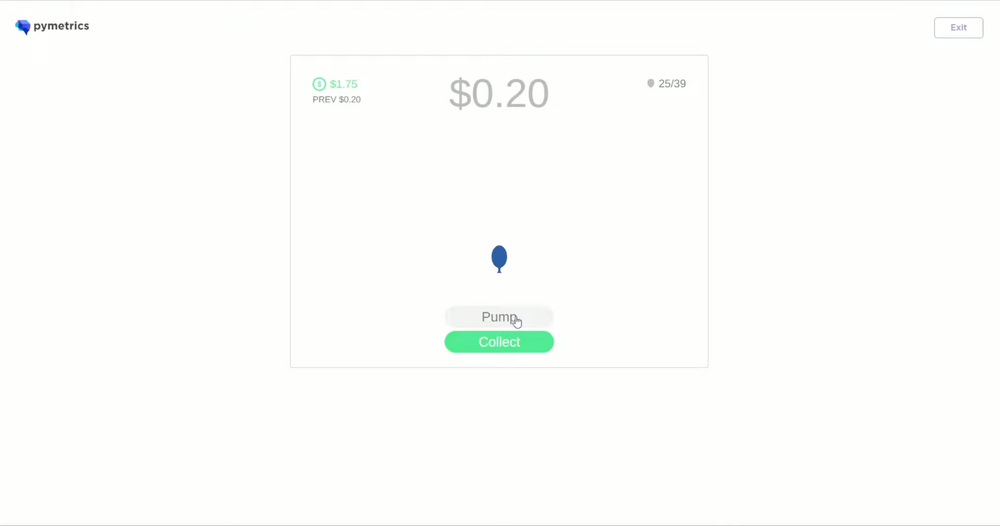 There is no fixed explosion point of the balloons, and each balloon color has its own possibility of an explosion.

With that being said, you should keep an eye on each balloon’s color when it explodes. By collecting such data, you can make an informed guess as to when each is about to pop. This is an effective method to learn more about popping rules and to make better decisions with the next balloons.

Since this is a game to assess your personal traits, there will be no good or bad results and you can never know exactly when the balloon will explode.

The Pymetrics Tower Game is another version of the famous Hanoi Towers Game. The game gives you three towers with different color rings placed on them and a model-colored tower. Your job is to arrange and stack the rings with the smallest number of moves, so they match the color on the model towers. You have around 2 minutes to tackle this game. 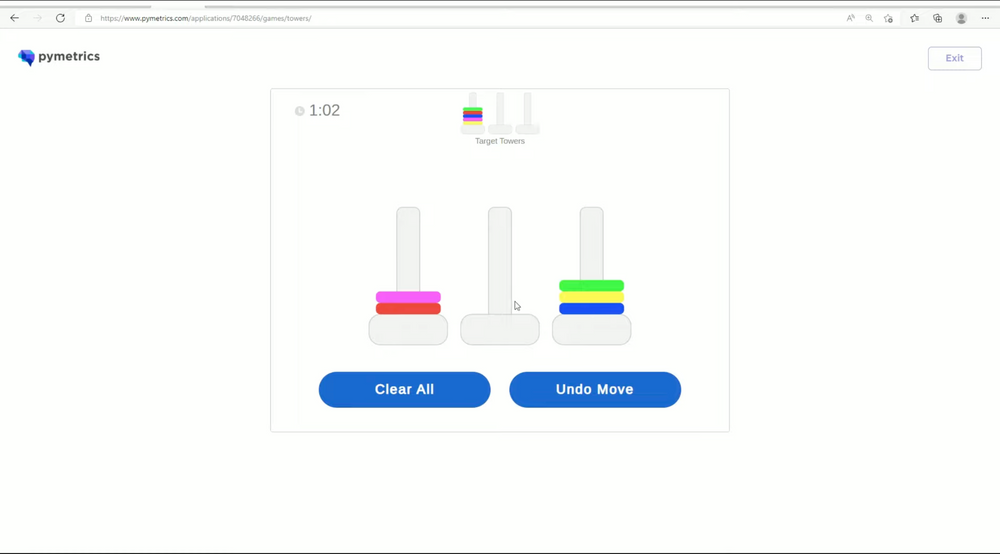 This game focuses on evaluating planning skills and two primary factors affecting the assessment include:

•The number of moves you make;
•The amount of time it takes you to make the first move.

These factors portray your planning ability and demonstrate whether you plan ahead or not.

There are two games involving money exchange, but this is the first one. In the Pymetrics Money Exchange, you will have to work with another random participant.

The game starts with you having $10 in your account. You have to send an amount of your choice to your partner. The partner will receive triple the amount of money you have transferred, and he has to decide how much he will give back to you.

At the end of this game, you will be asked to rate how fair your partner is out of 10 in the transaction. You only have around 7 seconds for this game.

Through the Money Exchange game, employers can measure the level of Trust and Risk Tolerance of each candidate. The amount of money you give away and the fairness you rate are the two parameters for the personal traits assessed in this game.

The second Pymetrics Money Exchange game is a variation of the first one, but with slightly different rules. You still have to work with a random partner on this task. 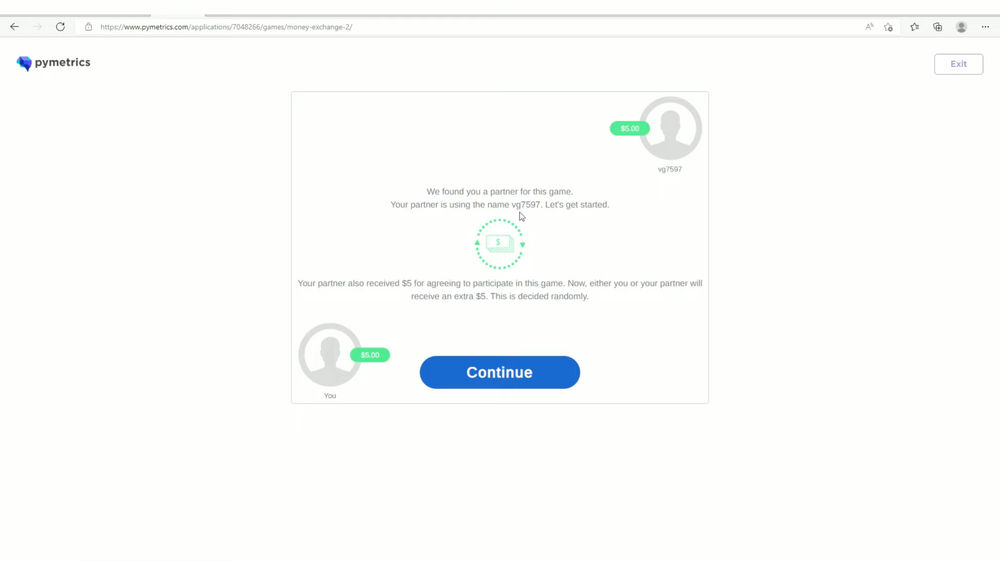 This time, both of you will have an amount of $5 at the beginning of the game but you will later receive an extra $5. The game presents you with a two-choice decision whether to take or give an amount of up to $5 to your partner.

At the end of the transaction, you, again, have to rate the fairness of it. This game aims at measuring the level of trust and altruism of each candidate. You should keep this difference in mind to stay consistent with your rate of fairness between these two games.

Three traits of measurement include

Within two minutes of this game, the signal will constantly switch between “Start” and “Stop”. Therefore, you will have to fully concentrate on these signals. Pressing the key either too early or too late might indicate you as an impulsive individual.

In this Hard or Easy Task game, you are posed with two tasks:

The requirement is you have to decide which task you aim for within around 2 minutes. This game helps companies measure

The rule for this game is simple. It makes no sense to choose a task that is difficult yet the reward is low, and you aren’t even likely to succeed at it. This decision presents you as a person who can think strategically and know where to invest time and energy.

The Pymetrics Digits game assesses how well your memory is by requiring you to memorize a sequence of numbers in 2.5 minutes. The digits will appear quickly in turns on your screen and once the showing stops, you have to type them down in the correct order. 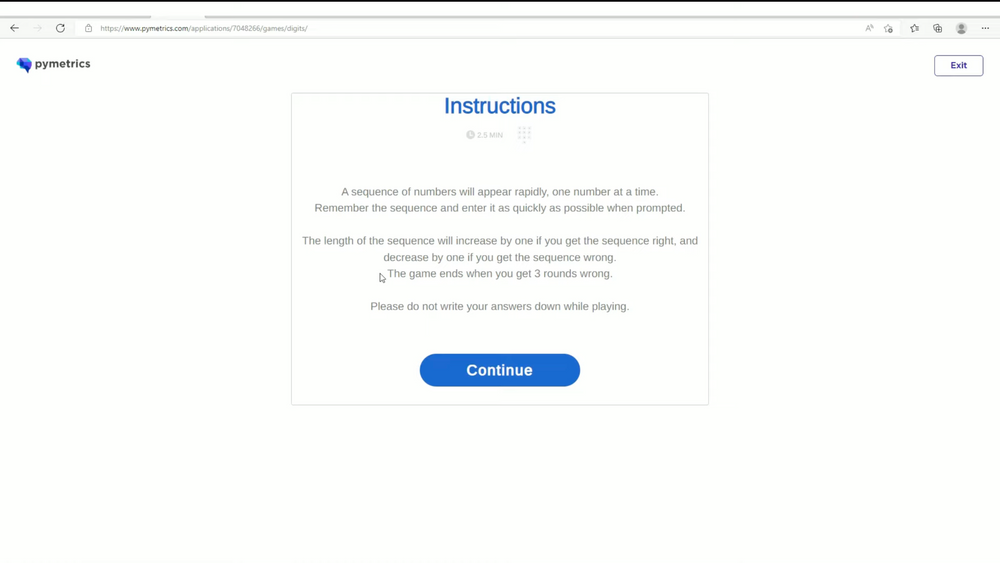 As you progress, the number of digits over each round will increase by one. Therefore it’s increasingly difficult towards the end of the game. You can improve your performance in this game by trying to read numbers out loud and repeating them. Your memory works better when it’s active, not passive.

The Pymetrics Stop Game presents you with a random series of shapes in two different colors flashing in turns. You will be required to press the space bar for a specific color. What makes it hard is you will struggle to immediately stop pressing after responding to, let’s say, a sequence of that specific color. 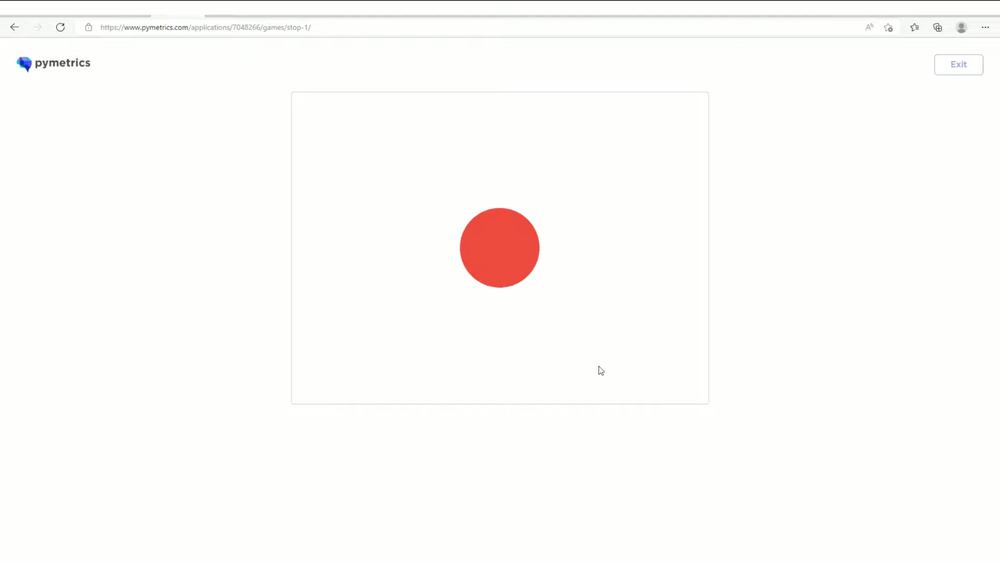 What you can do is focus and pay close attention to the game, as there’s no way you can figure out each color’s pattern behind this 2-minute game. 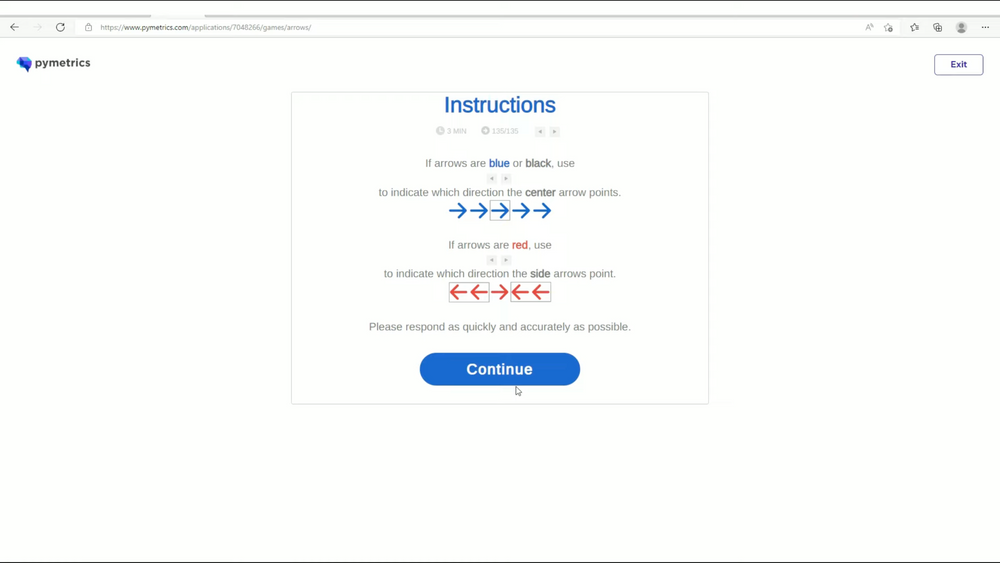 The Arrows Game aims to measure:

You will have to prepare yourself for this game, as your brain will constantly have to focus for 3 minutes straight.

The Pymetrics Lengths Game involves a presentation of different faces with each having a mouth that varies in length. For each round, you have to determine whether the face has a short or long mouth and react accordingly. 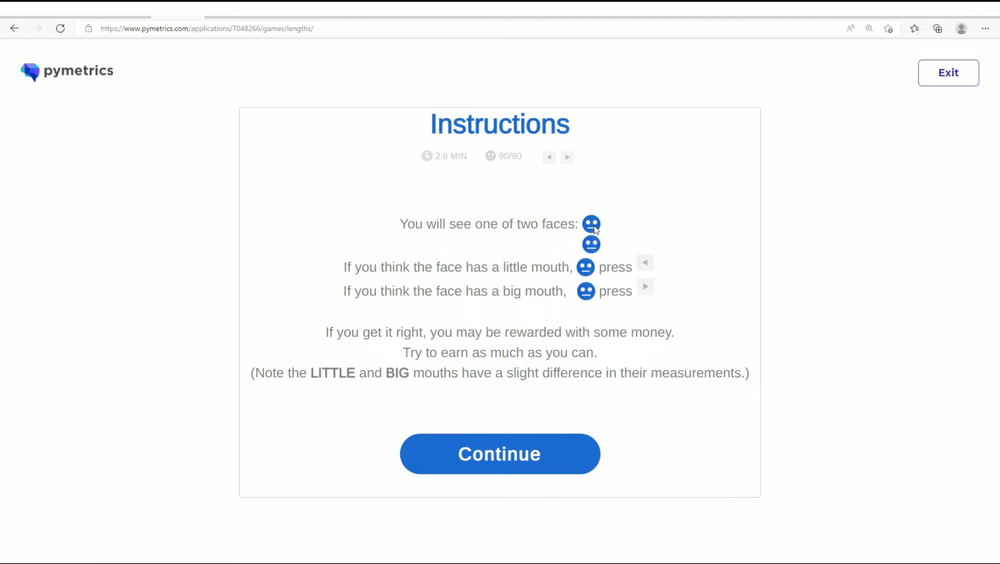 The difficulty lies in the slight difference in the mouth length. You will have to pay close attention to be able to spot the mere difference. It might be almost impossible to distinguish between the two length variance unless looking at both at once.

The Pymetrics Cards Game bears a similarity in measuring purpose with the Balloon game. It assesses risk-taking by allowing candidates to draw cards in turns with each turn receiving either a reward or a penalty.

You start the game with an amount of $2000 and you must draw cards out of four decks until the end of the game. You can switch the deck at any time. The goal is to finish the game with as much money as possible. 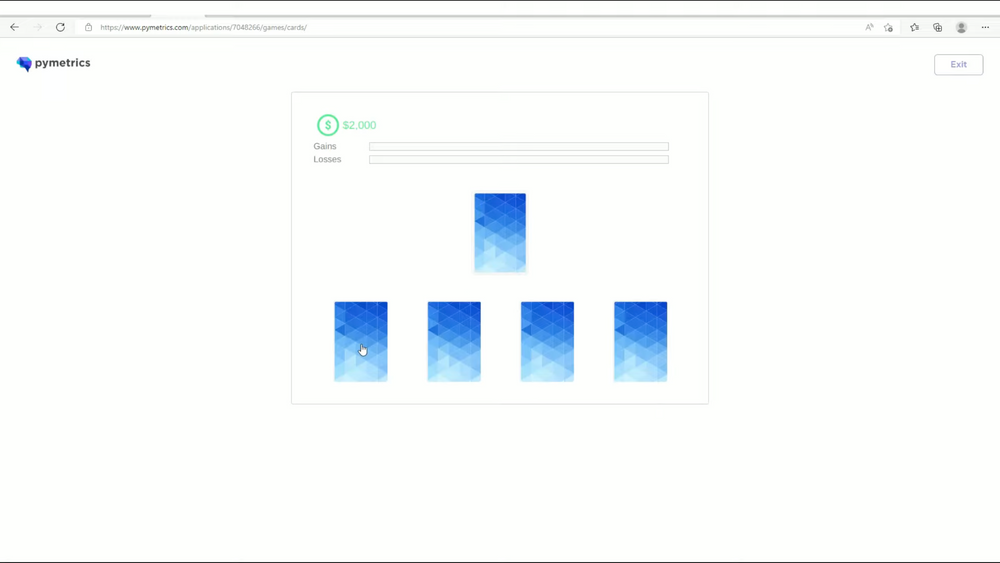 Towards the end of the game, you may eventually recognize the rewarding pattern and make better drawing-card decisions.

This game assesses the following patterns:

This game is different from the rest of the core games. Its purpose is to measure emotional intelligence instead of cognitive abilities.

As the core games measure personal traits and partially cognitive abilities, there’s hardly a way to play around these games. You can improve your performance on cognitive tasks, not personality assessments.

However, there are some tips to help you increase your likability of receiving an offer for the next employment round.

•Understand the evaluation criteria of each game. It’s important that you know what the game measures and make reasonable decisions.
•Research beforehand. You can make thorough research about the company you are applying to and try to understand the requirements of the employees, not of the positions.
•Follow the instructions. When doing the game, make sure that you are doing exactly what is stated in the instruction.

Avoid technical issues. You should make sure that your keyboard is working properly since many of the core games involve using the keyboard.

Which companies use Pymetrics Game assessments?

Pymetrics Games are favored by many corporations and prestigious companies. The list includes the following names:

What are the 12 Pymetric games?

12 Pymetrics Games refer to 12 core games of the Pymetrics Assessments designed as a hiring solution for many corporations and famous companies. The game list includes

How do I prepare for a Pymetrics test?

To prepare for a Pymetrics test, you can do the following:

What kind of games are in Pymetrics?

There are two kinds of games in Pymetrics games. One is a set of 12 core games measuring different personality traits that last 25 minutes. And one is an additional set of 4 games measuring Numerical Agility and Quantitative Reasoning that last 7-10 minutes.