What is a Verbal Analogy Test? (7 Common Word Bridges)

Verbal analogy tests are often used in the hiring process to measure candidates’ logic and reasoning skills and word knowledge. To solve verbal analogy questions, candidates first need to understand the word’s definitions and use that knowledge to explore how the words are related.

Typically, there are some common word bridges that can help you easily define the relationship between words. This blog gives an insight into the verbal analogy test, as well as introduces the 7 widely-seen word connections.

What is a Verbal Analogy Test?

Verbal analogy tests measure your ability to recognize relationships between pairs or sets of words. The questions can include a variety of words and concept connections, but the question structure remains similar in different tests.

•Part 1 provides an example word pair with a specific relationship.
•Part 2 shows a word – your task is to find its counterpart according to the relationship of the given example.

The most common format of a verbal analogy question will look like this:

After days of research, we’ve come up with 7 mostly-used bridges in verbal analogy tests. Once get familiar with these 7 word connections, you can deal with verbal analogy questions smoothly. In addition to the definitions of the bridges, we also provide detailed examples with easy, medium, and hard levels. Discover now! 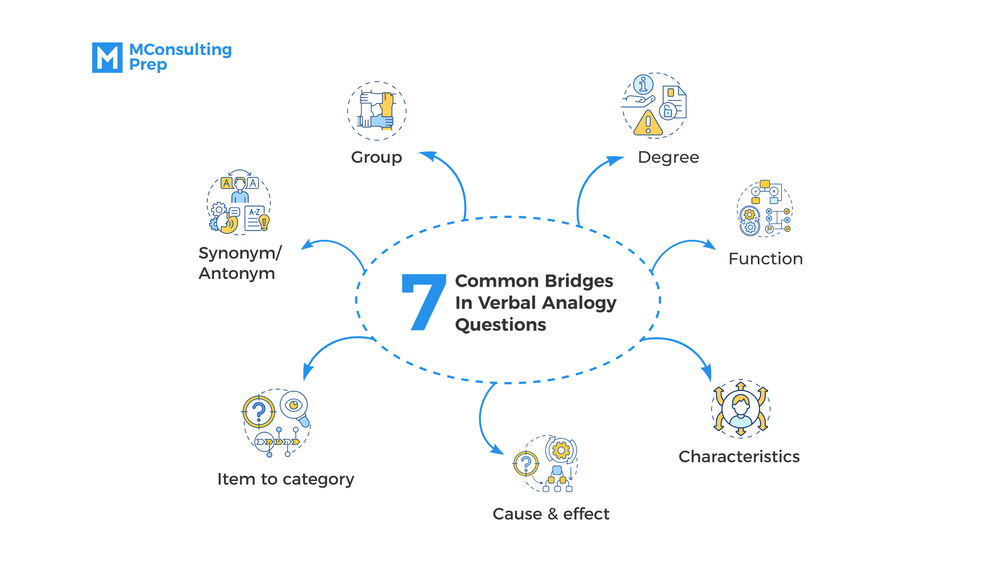 As its name implies, the synonym bridge requires you to choose a word that has the same meaning as the given word.

Meanwhile, the antonym bridge asks you to pick a word that has an opposite meaning to the provided word.

The characteristic bridge asks you to pick one word that describes the other.

The Group bridge requires you to choose a word that is a part of the other.

The function bridge covers one word naming an object and the other describing its function.

The degree bridge requires you to identify the nuance of meaning in degree among pairs of words.

The item to category bridge asks you to choose one word that is a type of the other.

The cause & effect bridge asks you to choose one word that may lead to the other.

Here is an example of verbal analogy questions in the CCAT.

MANGO is to FRUIT as …

A. BIKE is to CAR
B. SPEAK is to LISTEN
C. BOX is to STACK
D. DOCTOR is to HOSPITAL
E. BOOT is to SHOE

Explanation: The relationship between MANGO and FRUIT is Item to Category because MANGO is one kind of FRUIT. The same relationship exists between BOOT is to SHOE.

This type of question is included in the Criteria Cognitive Aptitude Test (CCAT). This simulation covers 50 questions under a time limit of 15 minutes – test takers have less than 20 seconds for one question.

The CCAT is one of the primary attitude tests produced by Criteria Corp., and one of the widely-used hiring tests in use. The test is used by tons of companies all over the world to measure different crucial cognitive skills.

Here is an example of verbal analogy questions in Cubiks tests.

Explanation: Cubiks provides verbal analogy questions in the verbal section of Logiks (Intermediate). This Intermediate-level test consists of 50 questions in 3 sections under a time limit of 12 minutes – candidates have 4 minutes per section.

Cubiks’s ability tests are divided into 2 types, all exploring how you process and reason with various kinds of information, like verbal, numerical, and the more abstract and non-verbal type.

Verbal analogy tests from Test Partnership are in the form of a valid and fair gamified assessment – Word Logic. 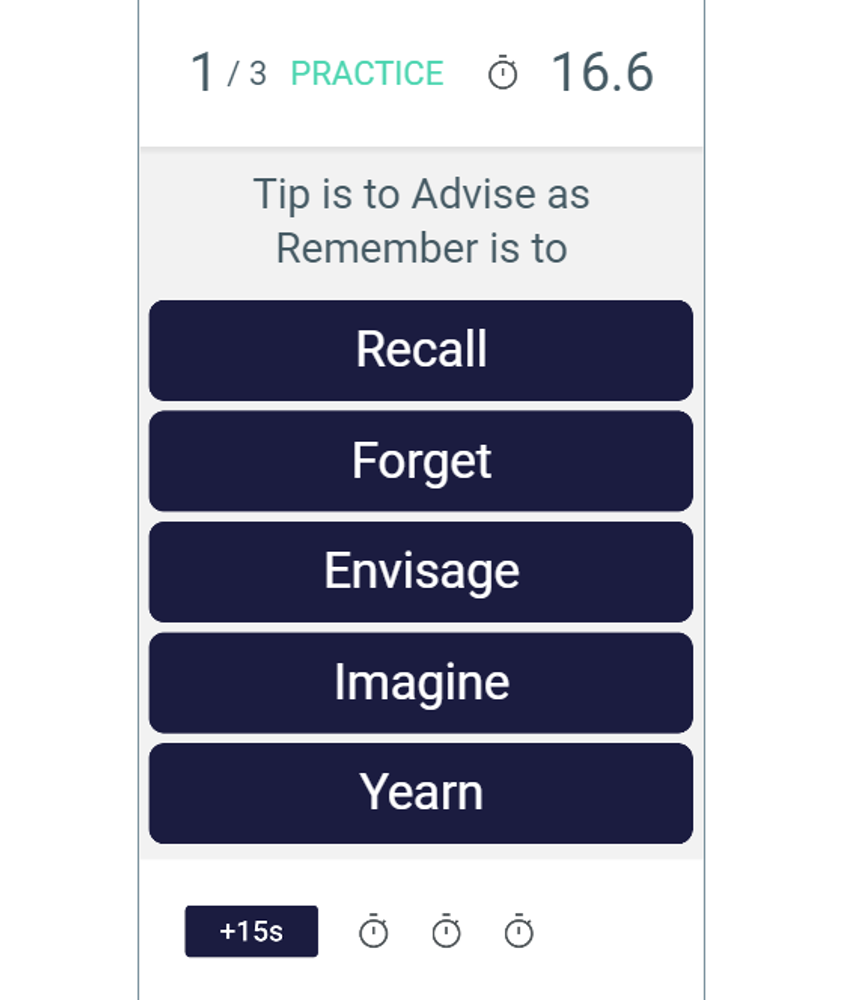 Word Logic is one of the major gamified tests in the MindmetriQ Gamified Assessments from Test Partnership.

The best way to pass verbal analogy tests is to enrich your vocabulary because the main purpose of these tests is to assess your knowledge of English vocabulary.

As mentioned above, verbal analogy questions are often based on a specific bridge. Thus, when you learn a word, it’s essential to pay attention to its word association and learn it in a certain context.

What about the most effective way to pass verbal analogy tests?

MConsultingPrep includes a range of verbal analogy questions in our verbal reasoning practice tests. That helps you get familiar with various word relationships and increase your speed efficiently. Try a free test now!