Wonderlic tests consist of different pre-employment assessments created by Wonderlic – a company that has more than 80 years of providing talent-hiring solutions worldwide. With each test package, Wonderlic helps employers assess candidates on a wide range of abilities and skills needed for the role.

In this article, we’ll be providing you with a complete overview of different Wonderlic tests and how you can prepare yourself for future Wonderlic tests.

What is the Wonderlic test?

The test package is designed by Wonderlic – a pre-hiring assessment platform that helps employers find the most likely-to-succeed candidates for specific job roles.

Wonderlic Tests are available in twelve different languages. Recruiters worldwide use Wonderlic Tests in the recruitment process of entry-level and managerial staff. 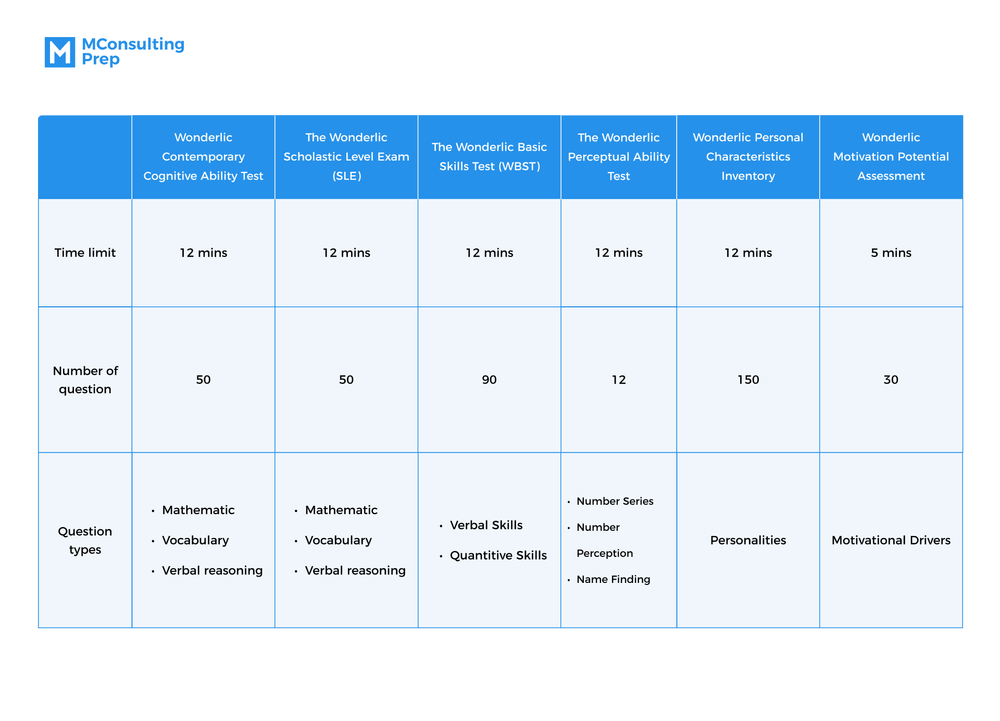 What is the Wonderlic Test used for?

There are three main types of Wonderlic tests that are used to assess certain values of candidates. Each type measures a specific aspect of an individual. These aspects include cognitive ability, motivation, and personality.

Wonderlic Tests are designed to assess individuals’ ability to learn, adapt to a new environment, solve problems, and understand instructions.

The most widely used Wonderlic test is the Wonderlic Contemporary Cognitive Ability Test. Many companies adopt this test for their recruitment program because of its valid test results in presenting applicants’ capabilities, virtues, and defects.

What is on the Wonderlic Test?

It depends on the kind of Wonderlic test you take that there will be certain types of questions. Overall, the questions on each Wonderlic test version will test exactly what the test name states. For example, the Wonderlic Contemporary Cognitive Ability Test is a cognitive test for an individual in comparison with the company’s requirements for the open position.

What is a good score on the Wonderlic Test?

The Wonderlic Test Package is tailored according to each company’s requirements for their specific open positions. Therefore, a good score on the Wonderlic test varies from organization to organization.

The score of your Wonderlic test will be counted on the number of correct answers you acquire. For example, a Wonderlic test has 50 questions in total, the maximum score you can get is 50. Wonderlic tests also use percentile score, which is to put your score in comparison with applicants.

The average score for a Wonderlic test across all industries is around 20 to 25, but this isn’t the fixed score across companies. Each company will set a certain passing score, and whether you pass or not will depend on the company you apply to.

Companies may adjust their passing score based on the job availability, and recruiting schedule in correspondence with the number of applicants. If it is an urgent-hiring position, companies may increase or decrease the passing score to fill in the position in time.

The standard Wonderlic Personnel Test is a collection of 50 questions that should be done within 12 minutes. This is the most popular version of the Wonderlic Contemporary Cognitive Ability Test. Companies and organizations often adopt this test during the early stage of the recruitment process to filter out incompatible candidates.

Sometimes, employers will prefer using the shorter version of the Wonderlic test – the quick Wonderlic Personnel Test. This test is generally the same as the 50-question test in terms of question categories. However, this test only has 30 questions with a time limit of 8 minutes.

Other versions of Wonderlic cognitive test

However, the SLE is mainly used by universities and colleges as a standardized entrance test. It aims at assessing a student on reading comprehension ability, formal logic skills, numerical reasoning ability, and data interpretation skills.

The SLE question categories include the following section:

The WBST is designed to identify the ability to succeed in postsecondary career programs or entry-level positions of prospective students and job applicants. In general, it focuses on evaluating the candidate’s potential to perform well in a workplace or office setting. The test does so by measuring the levels of General Educational Development (GED) of candidates.

The Wonderlic Perceptual Ability Test is also known as the “Hay Aptitude Test Battery”. This test is designed to test a specific group of skills for number-involving positions such as accounting, bookkeeping, data entry, and tellers.

The test is usually used in the preliminary hiring stages and is available in three different versions:

Besides the popular Wonderlic Contemporary Cognitive Ability Test, Wonderlic also provides employers with two other Wonderlic tests. They include:

The Wonderlic personality test evaluates the personality of job applicants. It looks for certain required traits of a candidate as different positions require different sets of traits. To succeed in a role, you need to possess a compatible personal character.

The five-factor section assesses candidates on the following personality aspects:

The seven-factor section assesses candidates on the following personality aspects:

The Wonderlic Motivation Test aims at assessing candidates’ personal interests and motivational drivers. The assessment tool is a development from the workplace motivation model for employees – Holland/RIASEC.

It focuses on measuring candidates on seven motivational drivers as follows:

The test consists of 58 questions and takes job applicants around 10-15 minutes to finish. By assessing candidates across these key motivational aspects, companies can have a better understanding of how prospective employees can be motivated through job responsibilities for future improvement of companies’ job satisfaction, performance, and employee turnover.

Which companies use the Wonderlic test?

Other corporations that also adopt Wonderlic tests in their recruiting process include PepsiCo, Mercedes Benz, EMCO, and Medline Industries.

Why practice Wonderlic Tests with MConsultingPrep?

The Wonderlic Test may seem like a major challenge for you, but by practicing with our Aptitude Test Bank, you will soon gain more confidence with the test. Practicing regularly and strategically is important to improve your performance on the Wonderlic test.

Once you become familiar with the test format, questions, time limit, and grading criteria, you better know your area of improvement. This is what sets you apart from other less prepared candidates.

MConsultingPrep’s practicing platform provides you with a structured guide and a library of practice tests for recruitment Aptitude Tests of all companies & businesses, including companies using Wonderlic tests.

Besides, you will also receive a comprehensive explanation when finishing every question. These extensive answers will eventually help you improve your test performance as you will not be making the same mistake AGAIN.

Our evaluation tools will lend you an extra hand in recording your scores and test times so you can have a better insight into your overall performance, what you excel at, and what you need improvements on.

You can sign up for our mock tests here to see how our tests work or gain immediate access to our 1000+ practice questions and structured study guide!